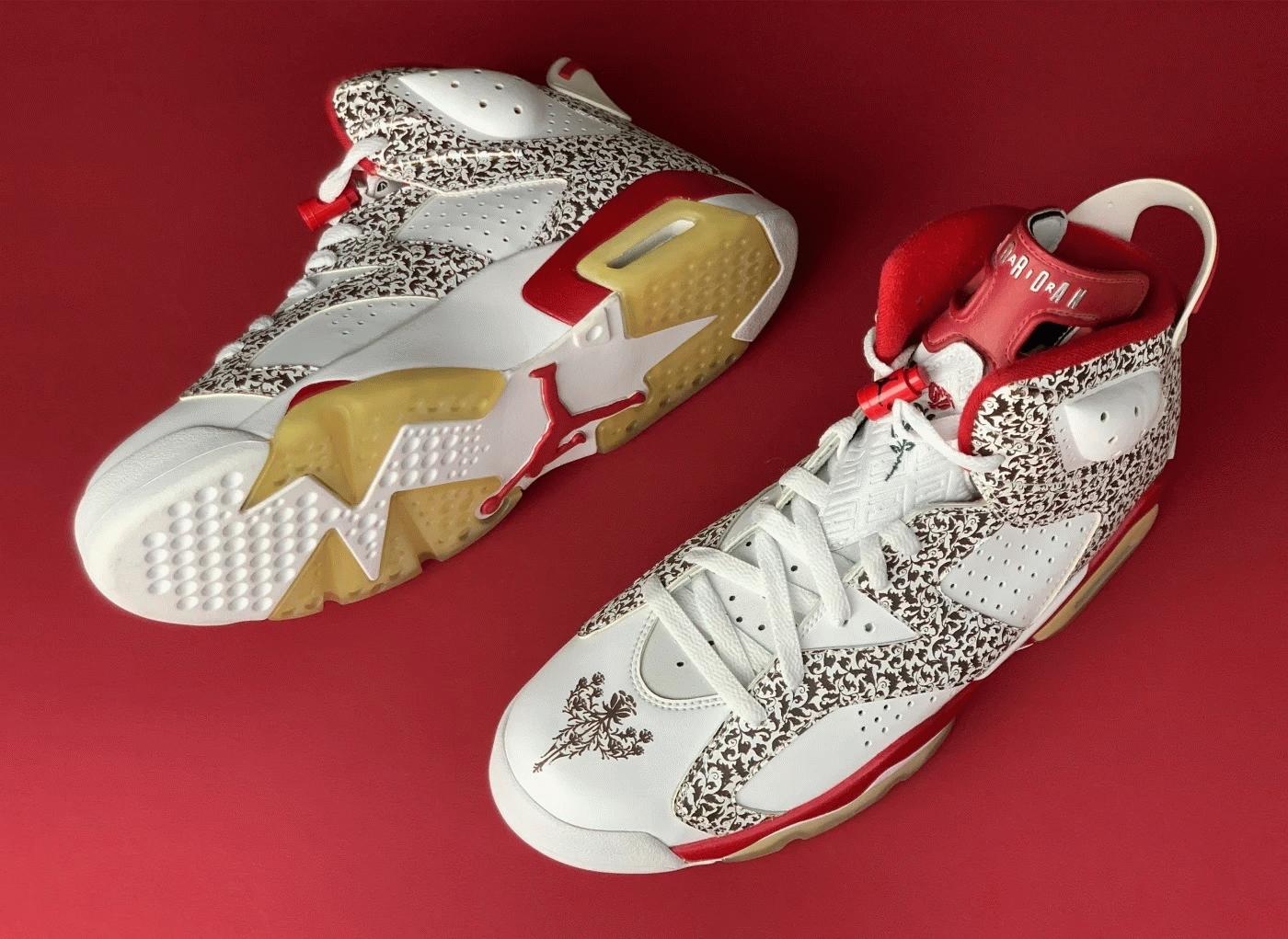 The sneaker was not meant for public consumption. It was not a marketing project or a commercial release. It was not a collaboration, but a token of condolence made just for Kanye West. Fittingly, it has been elusive since it was designed in 2007 and produced in 2008, a true rarity that has not been spoiled by endless social media reposts.
“We really wanted to just send an honest expression of compassion towards him,” says Jason Mayden, the former Jordan Brand designer who created the shoe. In his time at the company Mayden worked on product for athletes like Carmelo Anthony and Derek Jeter, but this was something entirely different. “It wasn’t something for clout chasing, it wasn’t something that was supposed to ever be seen.”
In West’s long, twisting sneaker catalog, there are few entries as rare and enigmatic as the “Donda” version of the Air Jordan 6. The shoe was made in memory of his mother, Dr. Donda West, who died in November 2007. Her name, along with lyrics from the Kanye West song “Roses,” appears on the sockliner. The upper is decorated with lasered roses. The <a title=”New Jordans” href=”https://www.jordansupdate.com/”>New Jordans</a> Jordan 6 model was a favorite of West’s in that era.
Mayden, currently the president of Fear of God’s athletics division with Adidas, has never spoken publicly about the sneaker before. He remembers Jordan Brand only making either four or six pairs, exclusively for West and his close friend Don C. They have only surfaced online a few times and usually from Don C, who posted the sneaker last month as buzz was building for West’s Donda album that’s set to release this week. Mayden never owned the shoe himself.
“I personally didn’t want a pair because I didn’t wanna keep anything like that in my collection, because it was something special and meaningful for him,” he says. “It wasn’t a typical release or a typical quickstrike or a typical collab.”
At least one set made it out beyond the tight group that they were intended for. A collector based in London acquired the pair of the “Donda” Air Jordan 6s shown here around two years ago. He is hesitant to share too many details about them and asked that his name be withheld from this piece.
How much did he pay for the shoes?
“A lot,” the collector says. “I signed an NDA to not give the exact number. It’s a lot of money.”
He won’t disclose who he got them from either, although he says the previous owner claims to have obtained them from someone connected to West’s inner circle. The shoes are tucked away, held in an environment engineered for their preservation.
“It’s stored securely,” he ensures. “Temperature, moisture-proof and all that kind of stuff. Especially on a pair like this, you just want to make sure it doesn’t deteriorate.”
His collection includes other samples, including a Nike Air Yeezy that never released. The plan is to start sharing them via Culture Curation, his new Instagram page dedicated to rare shoes and the stories behind them. The collector’s pair of the “Donda” Air Jordan 6 is a size 12, which is West’s own size. Because the shoe is so unique, one can’t really confirm its authenticity by comparison to other examples, but the he says he did his due diligence before buying it. Mayden believes the pair is legitimate, but it differs slightly from the ones that were sent out.
The ‘Donda’ Air Jordan 6 uses a white and varsity red colorway. Image via Culture Curation
“The shoe appears to be an authentic sample but not the final product,” he explains. “We didn’t do molding on the tongue portion. It was just clean with the embroidery of the rose from what I remember.”
The designer is one of a small group of people who worked on the shoe—longtime Jordan entertainment marketing lead Reggie Saunders was also involved, as was Gentry Humphrey, a Nike exec whose tenure at the company includes stints at Jordan Brand. Mayden says that trio alone was involved in the sneaker, adding that Michael Jordan himself did have to sign off on it. Jordan Brand has never worked with West on a sneaker, although they were sending him free shoes at the time.
West has maintained an affinity for Jordans despite being aligned with Adidas, the principle rival of Jordan Brand’s parent company, Nike. Given his long-term deal with Adidas though, where his Yeezy Boost sneakers helped make him a billionaire, a more official Air Jordan sneaker by Kanye West in the future is extremely unlikely.
The European collector has no plans to sell the “Donda” sneaker, but it’s hard not to wonder what such an impossibly scarce shoe could go for on the secondary market given the recent string of mammoth sneaker sales at auction houses. In April, Sotheby’s sold a sample pair of Kanye West’s Nike Air Yeezy signature shoes for $1.8 million.
Donda Air Jordan 6 Rose
“If anyone is willing to offer that kind of money, I’ll probably consider it,” says the owner of this “Donda” Air Jordan 6 pair, laughing. “Otherwise I’ll hold onto it, because I know once I sell it I won’t get it back.”
Their meaning and their place in history is not lost on the collector. The meaning runs even deeper for Mayden who, like West, hails from Chicago. Many of his childhood memories take place at Chicago State University, where his father studied and the late Dr. West taught.
Mayden is still surprised to see the shoes, which were meant to serve as a private gesture for a grieving man, surface online. His wish now is that some of that original purpose is fulfilled by their current owner.
“Hopefully that person treats it the way it should be treated,” Mayden says, “because it is an artifact of compassion, it’s not an artifact of clout.”