Nike SB Dunk Low Safari
Color: Neutral Grey/Kumquat-Desert Ochre
Release Date: March 14, 2020
Style Code: CD2563-002
Nike SB Dunk Low Safari Kumquat Olive is releasing with a subtly citric colour scheme and a hint of Summer vibes too. The fruit (Kumquat) is a call out to the warm and sunny summer days. Similarly, the colour scheme is pretty positive for other seasons as well. The Safari aesthetics and the citrus fruit flavour join together on this Dunk Low at the same time. It might sound a laid-back and understated silo, but it’s rather gorgeous depending on how you can flaunt it. You can throw on some casual outfit and be the head-turner; also you can wear these to the Summer parties!
Nike SB Dunk series has been boiling some seriously hot treats in the sneaker cauldrons lately. However, this particular Safari Kumquat Olive is going to make everyone faint after arrival! It’s wearable, functional, and fashionable all at the same time. We never expect anything less than awesomeness from this arsenal of Swoosh warriors.
While you are wasting your time thinking about your purse, the other sneaker snatchers are already at the stores right now! The Nike SB Dunk team has an extensive line of reputed sneakers and collabs with artists like Travis Scott. Likewise, there’s “Plum” and “Shadow” from the low-top racks. Apart from all that, this Safari Kumquat is stealing the spotlight! The underlays are breathable and flexible synthetic rip-stop fabric with kumquat yellow. As a result, the grey-dot leather overlays scream out the safari vibes. A light brown Nike Swoosh on the lateral sides and outsole keep the theme as subtle as possible. But the bright green accents from the brandings and the medial Swooshes refuse to let that happen! 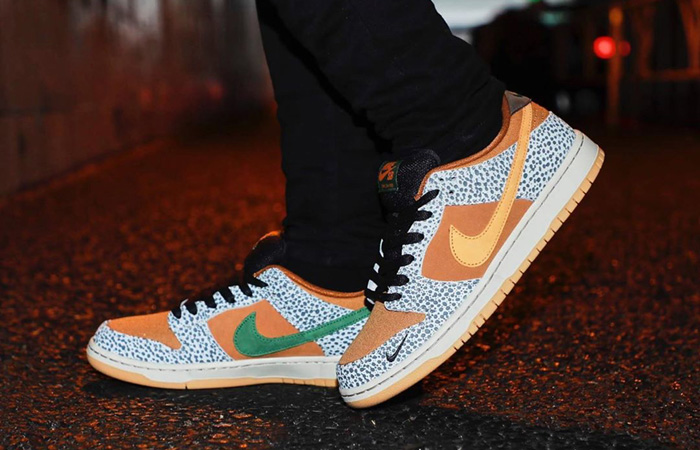 -RETURN-
30-day to exchange or return